On January 25th, 2022, the results of the voting where the journalists' guild elects the next immortals in the Cooperstown Hall of Fame were revealed.

The 2022 ballot includes 30 candidates with relevant numbers and each voter can choose between zero (0) and ten (10) candidates, being exalted those nominees who obtain more than 75% of the votes and eliminated those who do not reach a minimum of 5% in a maximum of 10 opportunities.

This year, the first time ballot appearance David Ortiz obtained a vote higher than 75% (77.9%) being the only one exalted to the Baseball Hall of Fame this year.

Great candidate, great baseball player and great person on and off the field. Truly the “Big Papi” deserves to be among the immortals of Cooperstown. Ortiz had very interesting numbers hitting 541 HR, 281 average and being an important element in the three World Series achieved by the Boston Red Sox.

While Ortiz left some impressive numbers, the controversy comes when names like Barry Bonds, Roger Clements and Curt Schilling, who did not get enough votes to be elected to the Hall of Fame on their last attempt, were dismissed.

But is it really justified for Bonds, Clements, and Schilling to be sidelined for being involved in the PEDs scandal uncovered in 2003?

Well, it seems that the electorate does not forgive mistakes of a moral nature, nor cheating or family conflicts, or anything that makes a player go to court and is capable of leaving the best players with the most impressive records out of the prestigious list of HOF members.

Bonds, the baseball player with the all-time home runs record with 762, Pete Rose who holds the record for most hits 4256, and the top Cy Young Award winner, Roger Clements winning it 7 times, ahead of Randy Johnson, Greg Maddux, Pedro Martinez are permanently out of the Hall of Fame.

We cannot defend the indefensible. It is true that Bonds, Clements, A-Rod, Sosa and others would not have achieved the numbers they show today. But I have no doubt that they were outstanding players who without the help of steroids would have achieved also impressive numbers.

Big Papi, who never used (or was never proven to have used) steroids and who, despite only having played as a Designated Hitter, built a very positive reputation among journalists who did not hesitate to praise him the first time he appeared on the ballot.

Ortiz became the fourth Dominican to be exalted after Juan Marichal, Pedro Martinez, and Vladimir Guerrero.

Here is a simplified table that I have made with data from mlb.com with some offensive data and only one defensive data, such as the Gold Glove Award, so you can draw your own conclusions.

What do you think? 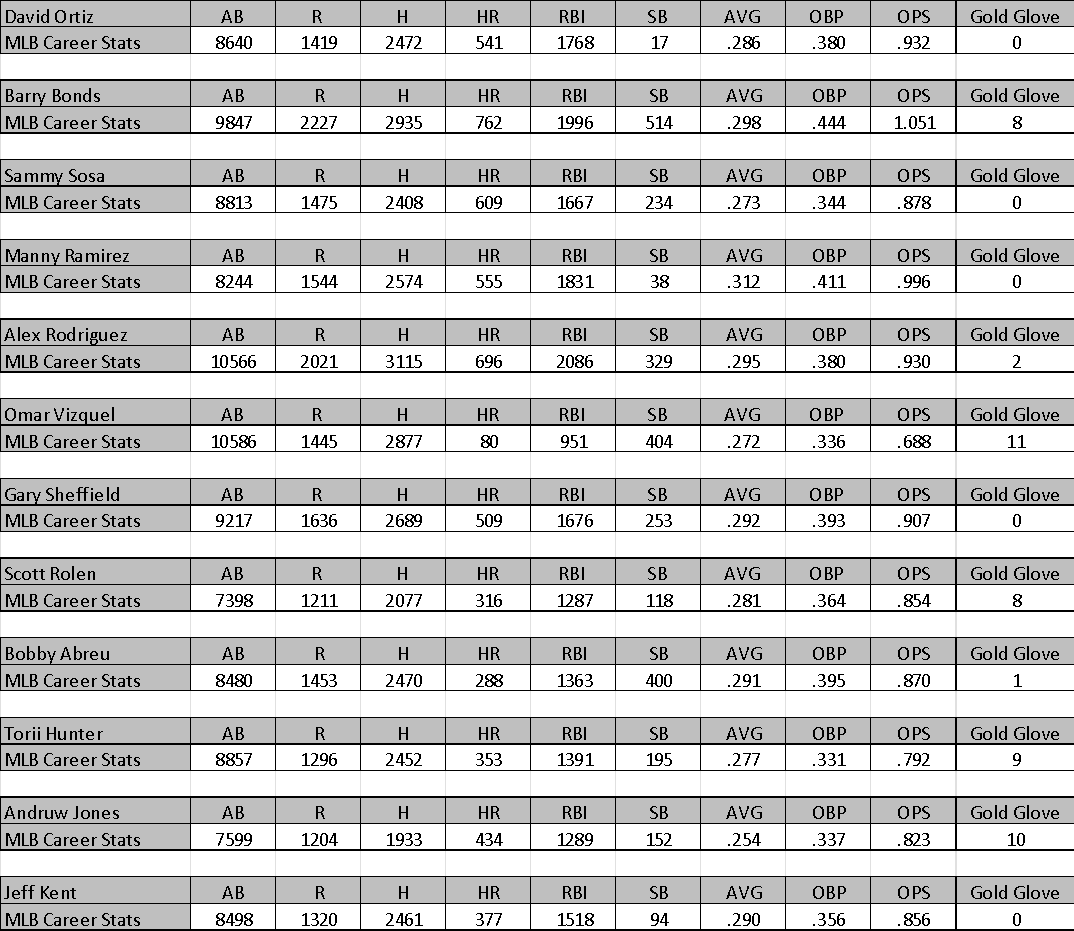